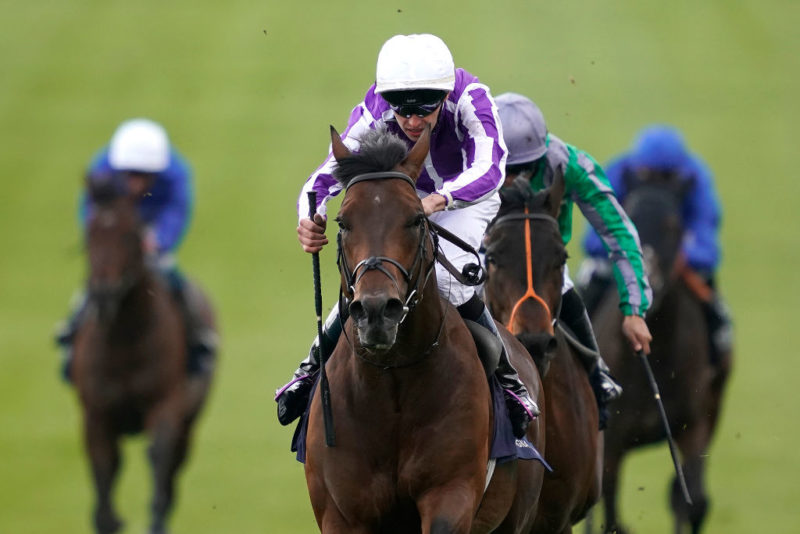 It’s Derby Day at Epsom Racecourse this weekend and like every Saturday we’ve got all the LIVE ITV races covered from a trends and stats angle, plus our free tips on each contest.

Yes, normally run in early June, but due to the coronavirus outbreak has been moved to early July – with the Epsom Oaks joining the Derby to be run on the same day.

Supporting the two big Epsom races are five more contests – four of which will also be shown LIVE by the ITV horse racing team.

Here at RACING AHEAD we’ve got all the ITV LIVE Saturday races covered with the key trends – use these stats to find the best winning profiles of past winners!

RACING AHEAD VERDICT: Just the five runners here but some promising looking sorts – last year we saw the classy Pinatubo win this race! Therefore, the Godolphin boys will be looking to follow-up this year – this time with a horse called Modern News. However, he was beaten in the Chesham last time at Royal Ascot and needs to bounce back. On a plus, the drop back from 7f to 6f here will suit and he won over this trip on debut at HQ and the Charlie Appleby yard have a 50% record with their 2 year-olds at the track. It’s hard to assess the newcomer Calcutta Cup, from the Andrew Balding yard, as he’s yet to race but they must quite like him to pitch him in a race like this on debut. Inhaler has shown a good level of form and can go well, while Twaasol was a nice winner on debut at Windsor. But the call here is for the Mark Johnston yard to take this with MUTAZAWWED. This juvenile ran well on debut (5th) at Newcastle, but improve on that to win at Lingfield last time out when stepped up to this 6f trip. The yard also has a cracking 48% strike-rate with their 2 year-olds at Epsom and also have a top record in this race – winning it three times since 2011!

RACING AHEAD VERDICT: The John Gosden yard have a 33% record at the track with their 4+ year-olds so their Daarik has to enter the mix. This 4 year-old won well on it’s return run at Newcastle but flopped in the Buckingham Palace Stakes last time out at Ascot. The softer ground that day might not have helped and he’s clearly better than that so could bounce back. SHINE SO BRIGHT has been running in better races than this so can make his presence felt now into Listed company. He’s a G2 winner and this 7f trip seems to be his best. A recent run in the G1 Diamond Jubilee Stakes should have him spot-on for this and ratings suggest (113) he’s going to be a big player here. He’s ridden by Silvestre De Sousa, who has won this race twice in the last three years. Safe Voyage is the top-rated in the field and rarely runs a bad race. He’s well drawn in 2 and ran the winner of this race last year – Space Blues – close on his return at Haydock last month. Any rain would help his cause. Vale Of Kent and Oh This Is Us are others to consider but both do have a bit of ground to make up if the official ratings are to be trusted.

RACING AHEAD VERDICT: A nice renewal of the Epsom Oaks, but one that does lack a bit of depth and does have a certainly ‘match-feel’ to it with the easy 1,000 Guineas winner – Love – and recent Royal Ascot scorer – FRANKLY DARLING – the two big players in question. Love will be looking to give the powerful Aidan O’Brien camp their eighth win in this Group One and the way she demolished a good Guineas field at HQ last month suggests she’s a very useful filly. He breeding also indicates there could be even more to come over this longer trip and I’d certainly not want to put anyone off her. However, this is still the furthest by some way that she’s gone (half a mile) and with her nearest rival – FRANKLY DARLING – being already proven over this trip when taking the Ribblesdale Stakes at Ascot last month, then at least we know there are no stamina doubts surrounding this John Gosden runner. The Gosden camp have also won 3 of the last 6 renewals of this race and just like Love, this Frankel filly also has a top-class breeding behind her. Frankie Dettori will ride and despite this being a step up in grade again, she showed an eye-catching turn-of-foot that day and so of the two big guns in the race I’m happy to stick with her. Of the rest, Ennistymon was runner-up to Frankly Darling at Ascot and can run another solid race, while the Roger Varian runner – Gold Wand landed a fair maiden at Newbury last time out and is out of the former Derby winner – Golden Horn – so is another that could have more to come on just her third outing.

RACING AHEAD VERDICT: The Godolphin team have a good record in this race so their Summer Romance will be popular. However, she’s got to bounce back from a poor run in the 1,000 Guineas last time out. In her defence she fluffed the start a bit in that race and can be expected to have come on for it too. Onassis was a nice winner of the Sandringham Stakes at Royal Ascot but this is a big step up in grade and she’s rated 22lbs off the top-rated in the field – Cloak Of Spirits. That last-named horse was a cracking fifth in the G1 Coronation Stakes at Ascot last time and with this a big drop in grade must have a big chance – prior to that she was runner-up in the 1,000 Guineas at HQ too. Fooraat is unbeaten from two runs and could be anything, while Rose Of Kildare is a solid performer that can’t be discounted. But the pick here is the Frankie and Gosden runner – LOVE AND THUNDER. This 3 year-old filly is yet to race in a grade like this but won well on her return at Newbury and looks the sort to have more to come. The yard are littered with top fillies so the fact they are pitching her into this level next is a good sign what they think of her and with only two career runs can be expected to have a lot more learning and improvement in the locker.

RACING AHEAD VERDICT: A lot of headlines have been written about English King, who has headed the betting for the Epsom Derby since landing the Lingfield Derby Trial last month – the same race the 2019 Derby winner – Anthony Van Dyck – took before going onto glory at Epsom. Frankie Dettori has also been booked to ride this Ed Walker runner as the pocket Italian looks to land his third Epsom Derby. The form of that Lingfield Trial win looks fair too with the runner-up – Berkshire Rocco – having since run second in the Queen’s Vase to the subsequent Irish Derby winner – Santiago. The horse had 2 ¾ lengths in-hand with Berkshire Rocco and also looked to have more in the locker. With only three career runs this well-bred Camelot colt should have more to come. With 7 Epsom Derby wins, trainer Aidan O’Brien needs just one more to become the all-time most successful handler in this race so anything he runs has to be respected. He’s landed 5 of the last 8 runnings too. Of his bunch Mogul can be expected to run better than last time at Royal Ascot, when flopping as an odds-on favourite in the King Edward VII Stakes, but after a 228-day break should be sharper for it. He could also have Vatican City in the race, but if running his RUSSIAN EMPEROR (e/w) looks the most interesting. This 3 year-old won the Hampton Court Stakes at Royal Ascot last time over 1m2f having needed every inch of that trip looks the sort to be crying out for further – which he’ll get here. The top-rated horse in the race is still the 2,000 Guineas winner – Kameko – and despite having a few questions to answer regarding the trip could have the class to get home. Oisin Murphy rides and will be looking for his first win in this race, but his breeding suggests this 1m4f trip might be a bridge too far and he was only really just doing enough to last home in the Guineas over 1m last time, so and extra four furlongs might be stretching his stamina – we’ll see! Of those at the bigger prices, the William Muir team have a live chance too with PYLEDRIVER (e/w). This 3 year-old stayed on really well to win the King Edward VII Stakes at Royal Ascot last month and with all due respect to the Muir yard, if he was trained by the likes of Stoute, Gosden or O’Brien would certainly be a single-figure price based on that 2 length win! With 6 runs he’s also one of the more experienced in the field and with that last run being his first try over this 1m4f trip then there could be more in the offering. Overall, I feel the favourite – English King – is solid but with Frankie riding might not be much value on the day. Kameko has stamina issues to answer, so I’d prefer to take a chance on the O’Brien runner Russian Emperor, who should improve for the longer trip, and also have Pyledriver onside based on his recent Ascot success – which he probably didn’t get the credit he deserved for.