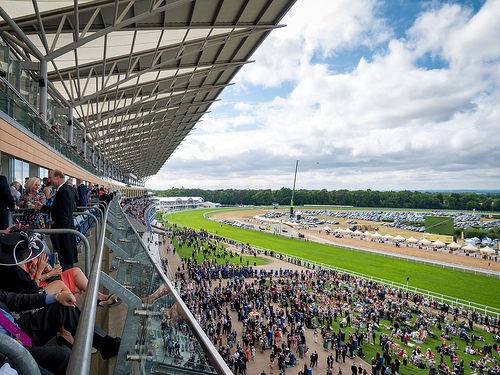 Michael Bell’s Big Orange won Ascot’s Listed Stakes en-route to a cup campaign thereafter and Secateur (4.00) looks a progressive stayer for John Gosden and Highclere Thoroughbred Racing. The selection isn’t completely straightforward but made a winning reappearance at Newmarket in the spring and has held his form well thereafter. The return to a small field should suit and in a bid to avoid the race turning into a tactical affair Frankie Dettori could well make all aboard this well-bred son of Danehill Dancer, and is taken to get the better of stablemate Mill Springs under Robert Havlin.

Charlie Hills’ Khareer could prove much better than his mark of 81 suggests and he is respected dropping back in trip after disappointing on handicap debut last time out at Ayr, but preference on this occasion lies with Flying Hammer (4.35) for William Haggas and Pat Cosgrave. The son of Acclamation arrives seeking the hat-trick after impressive victories at Chepstow and Kempton. A 6lb rise for the latter success seems fair and he remains one to keep on the right side of with further progress likely.

Roger Charlton’s Quest for More won the finale on the corresponding card last year before stepping-up to take the Northumberland Plate at Newcastle in the spring and David Simcock’s The Cashel Man (5.10) looks just as progressive and can land the lucky last under Jamie Spencer. The selection has won three of his four starts this term, his sole defeat coming when collared on the line at Lingfield, but he couldn’t have been any more impressive last time out when winning again at Newmarket and is a confident selection to defy an 11lb hike at the weights.

There’s terrific jump racing from Fontwell and Hexham with Kitchapoly (2.00) fancied to give weight and a beating to his five rivals at the latter. Donald McCain’s charge has tumbled down the weights after a string of inconsistent efforts during the summer but put his best foot forward last time out at Cartmel and can return to winning ways under Sam Twiston-Davies.

The pair can double-up with Mr Burgees (3.40) in the feature handicap chase over two and a half miles. The selection ran as if amiss earlier in the campaign but bounced back to form when second in a similar contest at Worcester, and followed-up to score on his next start at Cartmel under Wayne Hutchinson. He was unable to get into a rhythm last time out at Sedgefield but should be suited by the step up in trip and can score at the expense of Sue Smith’s last time out winner Brother Scott.

The McCain yard can score an across-the-card treble with Shantou Tiger (2.40) at Fontwell. The selection has been unlucky to bump into one on his two previous starts in Novice Chases at Worcester and Uttoxeter when chasing home the pair of Oscara Dara and Ballyklan over three miles. His run at the latter has already been franked with the Nigel Twiston-Davies trained inmate winning from a mark of 129 in the week and he is a confident selection to make light work of his handicap mark of 120 under 5lb conditional jockey James Cowley.

Workbench (3.50) landed Fontwell’s feature handicap chase over the minimum trip last term and can land back-to-back renewals from just a 3lb higher mark. Dan Skelton’s charge enjoyed a nice pipe-opener over hurdles at Bangor before failing to stay over two and a half miles last time out at Newton Abbot but should relish the return to two miles and can score for the fourth time under regular partner Harry Skelton.

The Skeltons can score a quick-fire double with Sir Mangan (4.25) fancied to make a winning debut for new connections in the handicap hurdle over three and a quarter miles. The selection toiled over fences last term, winning just one of eight starts over the larger obstacles, however prior to that had form tied in with some of the previous season’s leading novice hurdlers and can prove far better than his 124 rating suggests.

For all the latest odds head to BeVictor.com