Posted on June 9, 2020 by Andy Newton in Featured, From this month’s Racing Ahead magazine, News, Tips | 0 Comments 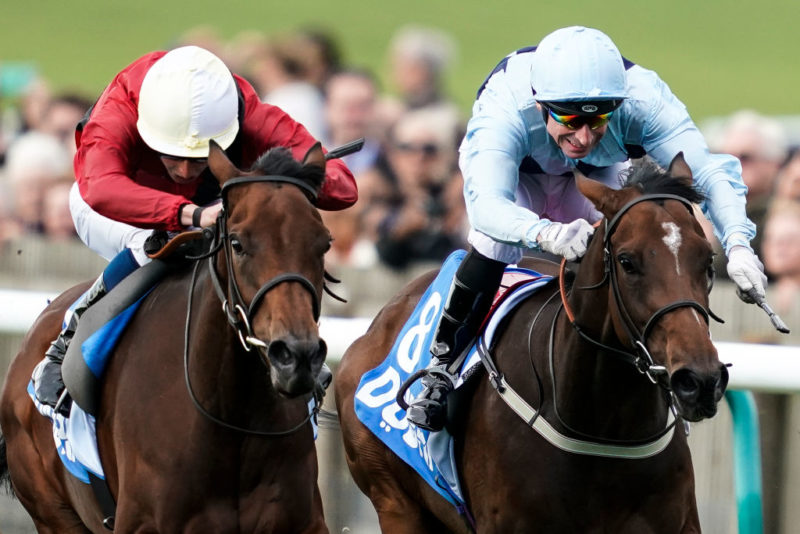 As well at the big card at Glorious Goodwood, the ITV cameras are also covering four races LIVE from Newmarket’s July course this Saturday.

We’ve two decent handicaps to take in, plus a couple of Listed contests.

We’ve got the key trends and stats for these LIVE races – use these to whittle down the runners and find the best profiles of past winners.

With a 27% record at the track with his 2 year-olds then a chance is taken on the Karl Burke runner SHE’S SO NICE here. A good winner over this course and distance last time too so the track is fine and can be expected to have more in the locker after only two career runs. Of the rest, the Mark Johnston yard also have a good strike-rate with their juveniles at the track, so their Basilicata is another to consider – William Buick, who does well at the course with the youngsters, rides. While in contrast the Roger Varian yard are surprisingly 0-from-26 with their 2 year-olds at the course so their Famille Rose has this to overcome, but recent form suggests she’s still in with a live chance.

Oisin Murphy has a 22% record riding 3 year-olds here so his mount Indian Creak has to be considered, but being trained by the Mick Channon yard, who are just 2-from-29 here, would be a worry. However, with a decent 24% strike-rate with this age ground here, trainer Andrew Balding’s RODIN gets the nod. This consistent 3 year-old was a good winner at Lingfield two runs ago and wasn’t disgraced when second last time at Kempton – this 7f trip suits him and it’s interesting the yard have booked the 5lb claimer William Carver to ride. Of the rest, Karibana and Baashir will also be popular are good recent wins

Course winner WEST END GIRL has to have a chance, being the only proven scorer at this venue. She will find this race a lot easier than the G2 Ribblesdale Stakes at Royal Ascot last time, but prior to that was a close third in the Lingfield Oaks Trial. Being a 3 year-old she gets weight from the older horses and the horse should be a lot fresher with connections giving her 46 days off since that last run – the Johnston yard also boast a decent 27% record at the track with their 3 year-olds. Godolphin’s Expressionism and Golden Lips, who was runner-up in the already mentioned Lingfield Oaks Trial are others to note, while recent winner – Katara – is sure to be popular coming from the Sir Michael Stoute yard and having Oisin Murphy riding. But the other main pick is the Hughie Morrison runner – COSMIC PRINCESS. This one was a nice winner at Newbury last time out on only her second run and can be expected to be better for that. She ran green that day so would have learned a lot from that and Andrea Atzeni is an encouraging jockey booking.

Note: Run at Nottingham from 2018 back

Just the four runners here and despite heading here in cracking form, the Charlie Fellowes runner – Dubious Affair has a fair bit to find based on the ratings. She’s rated 88, but with all the others rated in the 100’s then she’s a got some ground to make up. Having said that, she’s a filly at the top of her game and has excelled over this longer trip. She’s one of just two proven winners over this distance in the field too, so that would give her a squeak and also gets 5lbs from Moonlight Spirit and Withhold – she can run better than her rating suggests. The 100-rated Vivid Diamond to the other horse getting weight. Moonlight Spirit and Withhold are both rated 108 so might not be much between them either. Withhold was last seen running fourth in the Ascot Gold Cup and then the G2 Henry II Stakes so should find this drop into Listed grade a lot easier. Moonlight Spirit was a beaten favourite in the G3 Silver Cup at York last time so has a lot to prove at the moment. The first-time blinkers are on today and they might help, but a fair amount of trust has to be taken into account and despite having the clear ability to win a race like this, recent runs suggest it would be better to see it on the track again first. So, a chance is taken on VIVID DIAMOND bouncing back to form. She should find this race a bit easier than the ones she’s been running in, while the step up to 1m6f looks a plus – her last win came over this trip. She also gets 5lbs off the top-rated pair and recent runs haven’t been as bad as her finishing positions might suggest.