Posted on November 5, 2019 by admin in Featured, From this month’s Racing Ahead magazine | 0 Comments 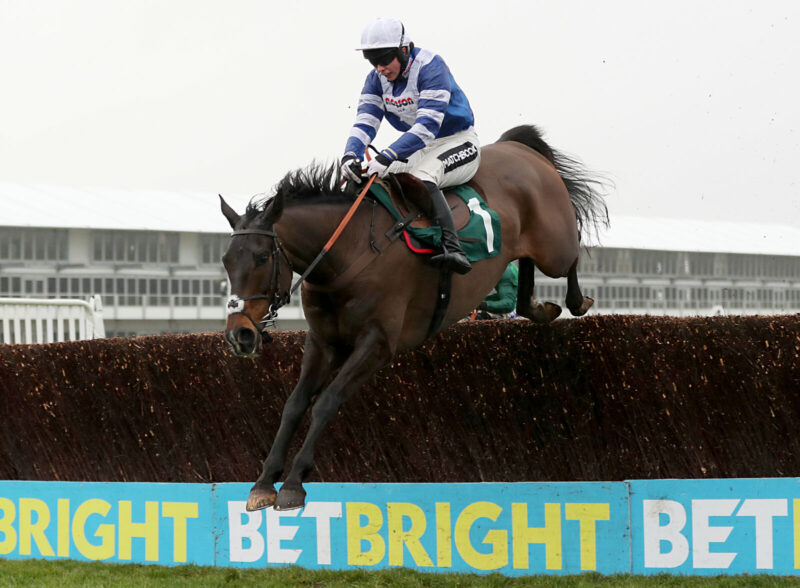 When you come out of work at night and the headlamps go on straight away, that is the signal to post your five to follow for the forthcoming National Hunt season!

To have a sound jumper on your side, flying around the undulations of the Cotswolds track is worth a far few lengths over two and a half miles and a few more over an extended three and a quarter.

Hence the inclusion of this mighty chaser in my ante-post book for the Cheltenham Gold Cup in March for which he is currently quoted at around the 25/1 mark.  You could argue that he is the best leaper of a fence over a distance of ground in the UK and Ireland.

On my private ratings I have the seven-year-old some 8lbs off the best chasers in training, but there are reasons to believe that with his sound jumping he could take another step forward over a further distance. Go the distance with the odds on offer with MightyTips.com.

The son of Nickname has only raced at three miles or more twice. On the first occasion he was outpaced by Might Bite, who was at the top of his game, at Sandown in November 2017 and last season when out battling

Elegant Escape in the Cotswold Chase at Cheltenham over an extended three miles.

What was interesting that afternoon was that the Welsh National hero looked sure to overhaul Frodon 200 yards out, but this mighty atom of a chaser picked up again in the final 50 yards and forged on.

‘Ridden 5 out, stayed on at the one-pace’ – Betway Handicap Chase (Aintree)

‘Led 2 out, stayed on strongly to forge clear on flat’ – Reynoldstown Chase (Ascot)

All three of those runs in the second half of the season stamped this ultra-game six-year-old as a bottomless stayer to go to war with this term.

It could well be that the Colin Tizzard-trained chaser has a shot at the highest class, but let’s be under no illusion, galloping is his real asset and the further he goes I fancy the better he will become with deep ground no issue whatsoever.

That makes the Welsh National at Chepstow in December the most likely target for this youngster who has looked a sound jumper in the main.

A PLUS TARD – Henry de Bromhead

I am banking on Frodon going down the Cheltenham Gold Cup route as I have invested heavily in this chap being aimed at the Ryanair Chase in March.

His performance in landing the Close Brothers Novices’ Handicap Chase by a full 16 lengths off a mark of 144 at Cheltenham was one of the performances of the season. Jumping for fun that day he put on the afterburners between the last two fences and fairly powered up the famous hill.

Stepped up in grade and distance for the Grade One Champion Novice Chase at the Punchestown Festival, he looked a big danger two out, but failed to get home. That performance strongly pointed to the view that two and a half miles is his trip and his trainer has already suggested he will be campaigned with the Ryanair in mind and his current odds of 20/1 look more than fair.

Okay so there isn’t much we don’t already know about the King George winner and that is where I will rest my case. As Nicholls said afterwards, he just didn’t get up the hill in the Gold Cup at Cheltenham, where the late rain was a huge negative, and I fancy that he looks set to enhance the trainer’s already remarkable record in the Christmas Feature.

See More Business and Silviniaco Conti both returned to Kempton to defend their titles successfully while Kauto Star’s exploits in the race will forever go down in the history books of this great sport.

Indeed if it weren’t for the lurking shadows of Altior and Cyrname, this still relatively unexposed seven-year-old would be a 2/1 favourite for this show piece event yet he is readily available at 11/2.

He travelled like the wrath of god that day and despite idling when he hit the front, the seven-year-old was always doing enough in the closing stages to see off former winner Thistlecrack. This is the only race I shall be supporting him in this season. Post December 26 his job will be done for ante-post purposes.

It would be so easy to get on board the Chacun Pour Soi Champion Chase bandwagon and his dismantling of both Defi Du Seuil and Duc Des Genievres at Punchestown inevitably pointed to this bay gelding as a possible superstar.

However, there are three reasons to possibly abstain from that route. First, he is a fragile individual (hadn’t raced for over two seasons prior to last year’s campaign), second, he could very well step up in trip, and third, there is Le Richebourg!

Winner of four of his five starts over fences, his only defeat came over two and a half miles behind Delta Work in the Drinmore, his high cruising speed and fast and efficient jumping were a hallmark of his wins, the best of which was saved for last in the Arkle Novice Chase at Leopardstown in February.

Injury meant he had to bypass Cheltenham, but the latest news is that he has fully recovered from that setback and is ready to roll towards the back end of the year. He only needs to resume his upwardly mobile path to become a serious contender for the speed crown in March.