Posted on July 7, 2020 by admin in Featured, From this month’s Racing Ahead magazine, News | 0 Comments 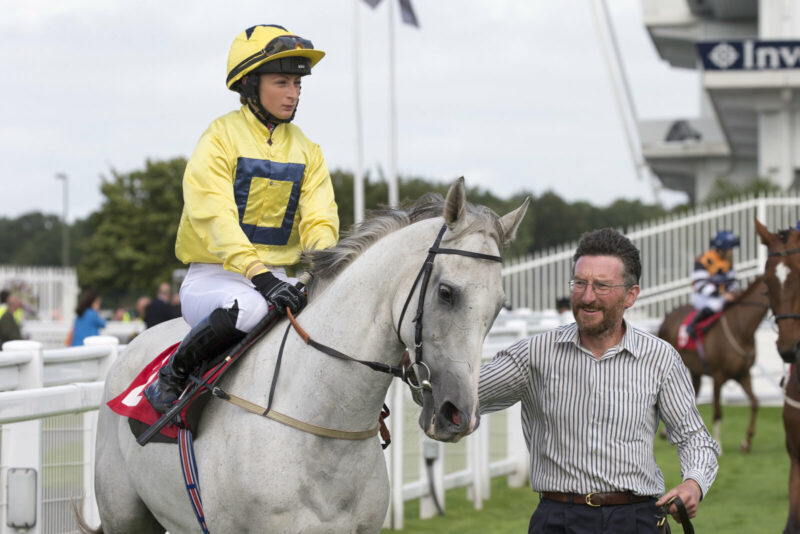 How did you get into racing and who or where have you worked with in the sport?

I was lucky enough to grow up on a farm and we had horses and ponies there, and my parents were interested in racing. It just came naturally to love horses, love riding and love racing. I wanted to be a jockey when I was young (which didn’t work out) so started work in a stable the day I left school and have been working in the sport ever since.  I can’t imagine not being involved in it.  I worked for three trainers when I was young – Andy Turnell, Ian Matthews, Luca Cumani – then spent a year in Australia working in racing over there, and then spent three years working on Wood Ditton Stud when I got back to the UK. Then I started training in 1995.

Where do you train and how long have you been there?

I train in Beverley House Stables in Exeter Road, Newmarket. I started training over on the other side of town in 1995 and then moved into this stable two years later.

How many horses do you have in training?

Numbers go up and down a bit year by year, but we’re generally somewhere between a dozen and 20. We’d be at the lower end of that range currently.

First runner/winner as a trainer?

My first runner was a horse called Witchway North in a hurdle race at Fakenham, during Cheltenham week in 1995. Shane Lyons rode her. My first winner came a couple of months later: Lorelei Lee at Beverley, ridden by Kieren Fallon.

Largesse in the Peugeot Doonside Cup at Ayr’s Western Meeting in 1998, ridden by John Egan. That was only my fourth season training and I still thought it was easy then, as one invariably does when one starts and is still too ignorant to know otherwise. That remains the only black-type winner that I’ve trained. But the next one is just around the corner (hope, of course, springing eternal in the human breast).

Roy Rocket for many reasons I would suggest is the star of your yard. Give me a few lines on what he is like as a character and his traits?

He’s quite feisty in that he can be very impatient and also claustrophobic, but he’s very kind and gentle when he’s not messing you around. He’s a real enthusiastic and loves life, and he’s so characterful and expressive that you can read him like a book.

How did you discover that Brighton is his ideal track and why?

We went there as a last resort as a lowly-rated five-year-old maiden in the spring of 2015 and he won easily so we have kept going back. It’s hard to get him to relax in a race so he needs to be ridden very quietly in the first half of the race, and Brighton is one of the few tracks where back-markers are often able to get involved in the finish. Also, he’s a small, sound horse so he finds it easier than a lot of bigger horses do to be comfortable and balanced on the track’s undulations. And he likes firm ground, which one often gets there.  It’s harder than you’d think to find firm ground nowadays, even in a hot, dry summer.

Which other horses do you have high hopes for in 2020 and why?

I try not to think about it that way – if you waste time daydreaming about what they might do, you only end up disappointed. And, anyway, very often the ones who turn out to be the most successful aren’t the ones for whom you have the highest hopes at the outset.

Brighton, for obvious reasons. I’m always pleased to go to Yarmouth, and not just because it’s easy to get to. Ditto Fakenham. Kelso (which was my local racecourse when I was a child) and Musselburgh are both terrific, but I rarely go to either nowadays as they are so far away.  I think that they both claim to be Britain’s friendliest racecourse, and they are both right. It’s always a thrill to take a horse to Ascot, not that I do that very often. One thing which I do do at the start of each year is run through in my head whether we might have a chance of having a Royal Ascot runner. We’ve never had one and I can’t see that changing this year.

Who has given you your best advice?

Chris Dwyer and Lawrence Wadey have been both been rock-solid friends for many years and both have been sources of wise counsel throughout.

Favourite horses trained past or present and why?

I don’t really like this as it’s like listing which of your children you prefer, but inevitably the ones who have been successful tend to stick in your mind. You certainly have more reasons to be grateful to them and to admire them. Ones who come straight to mind include Largesse, Il Principe, Warring Kingdom, Jack Dawson, Diamond Joshua, Brief Goodbye, Benedict, Kadouchski, Ethics Girl, Indira, Hope Is High, Roy Rocket and Kryptos. Kadouchski will always hold a particularly special place in my affections as he is the only one with whom I have won as both trainer and rider (in the Newmarket Town Plate in 2011).

What is the best horse you have trained to date?

Largesse reached a peak BHA rating of 111. With a Timeform rating of 110p, Kryptos arguably had the potential to exceed that but tendon trouble intervened. I’m hoping that he might be able to start making up for lost time this year. Warring Kingdom had great potential and broke a track record (for two miles at Musselburgh) as a three-year-old but sadly was fatally injured in a race that autumn. Benedict too was still very unexposed when he broke a leg in the Lincoln on his first run as a four-year-old.

What time do you get up in the morning and what would be your average kind of day?

I usually get up at around 5.45. We start work at 6.30. We generally ride four lots and get finished some time around 11.00, although I might then ride another horse if we’re very busy. I do my admin during the afternoon, including any writing jobs which I have, and then start evening stables at 3.00. I’m generally back in the house by 5.00, although there’s often more admin/writing to be done. I try to be in bed soon after 8.00, particularly during winter when it’s very easy to get run down with the constantly being cold and wet, and I find that it’s hard to stay healthy if you’re not getting plenty of sleep. That’s the routine every day, although morning stables on a Sunday are shorter (and don’t start until 8.00) as most of the horses aren’t ridden. Days when we have a runner are obviously different (and longer, often much longer).

How many people work on the yard and which jockeys ride out for you regularly?

There are three riders including myself (plus one who rides one lot before going off to do a 9-5 job) and one person doing the work on the ground. Evening stables is myself plus one other – the three of them work the rota out between themselves as to who works which days. It’s very rare to have a jockey in, although John Egan is very kind and always comes in any time I ask. William Kennedy and Jack Quinlan are both very obliging if we need a jumper schooled, although it’s not easy for William as he isn’t local.

What’s the best and worst part of the job?

I can light-heartedly and more or less truthfully say that the best part of the job is also the worst part, ie the weather. Otherwise, it’s great to be working with horses, and to be a part (albeit a very insignificant part) of the greatest game in the world. Even the simple fact of not having to travel to work is great, although it does mean that you’re never off duty. The worst parts, aside from the weather, are worrying about horses as they are so fragile; and trying to keep afloat – financially, it is very hard to make training viable unless you are training for very rich people. It’s also not ideal to find yourself working 365 days a year, even if it is work which by and large you enjoy. In theory it’s possible to take days off or holidays; but, in practice, if you’re a small trainer, you don’t.

Who are your racing idols?

What hobbies or sports do you like to watch or play away from racing?

None. I love cricket (although I’ve never played it) but I virtually never watch it. The fact that it’s only on a subscription TV channel to which I don’t subscribe doesn’t help. I love reading books, including books about cricket.

When I was young, people (or maybe it was just our family) never ate food from other parts of the world, so I’ve never really got into the whole thing of pretending to enjoy Indian/Chinese/Italian/Japanese/Thai/Spanish/Mexican/Vietnamese/Arabic/Turkish/whatever stuff. You can’t go wrong with the classics like steak and chips, seafood or a roast dinner, although my wife says that I’m just a food philistine. I really enjoy some types of wine or our local beer, Greene King IPA or Adnams IPA, although my tolerance for alcohol seems to be diminishing as I get older.

I imagine that I’ll be listening to singers like Leonard Cohen, David Bowie, Harry Chapin, Paul Kelly and Graeme Connors, people who write beautiful poetry and put it to music, until the day I die.

I think that Inspector Morse and Seinfeld will always be my favourite TV programmes.  There are plenty of movies which I could watch again and again: many of Woody Allen’s films, Gallipoli, Casablanca, Dead Poets’ Society, Phar Lap, The Man From Snowy River, Apocalypse Now, Strictly Ballroom, Notting Hill

If you were put in charge of racing for one day what changes would you like to make?

I try to live in the real world, not the hypothetical or utopian one, so can’t think of any meaningful improvement which I could effect in a day (or month, or year …)

What are your current ambitions?

Staying alive, sound and healthy, in body and mind. Anything else is a bonus. You can’t take anything for granted.

Can you give readers a horse to follow for the rest of the season or beyond?

Of the ones I train, I’d maybe suggest Surooj (who came from the February Sale) but that’s simply because I haven’t done much with her yet (she’s only been walking and trotting yet; hasn’t even cantered) so she hasn’t yet had a chance to disappoint or disillusion me. That’ll come as the year goes on and reality kicks in.

This article appeared in the current issue of Racing Ahead – filled with tips for July’s racing, you can also get ahead of the game with horse racing betting USA.